Airsoft is a sport

Airsoft is a sport where replica guns are used as weapons to fire pellets at other players in a simulated battle.

It is similar to paintballing in that the aim is to avoid being hit while shooting at other players.

These battles take place on skirmish sites, which range from woodland sites to urban sites, where players are free to roam around and fire their weapons at each other on a Sunday afternoon.

It began in Japan in the mid-1970s before reaching the UK and the US in the 1980s and it has continued to grow since then.

How popular is Airsoft

The fact that there are 150 skirmish sites registered across the UK with the number likely to increase is an indication of how popular Airsoft is.

On average, these sites can provide Airsoft activities for groups of 30-40 people each weekend, potentially meaning over 7,000 people could be playing on any given Sunday.

There are also skirmish sites in almost every European country so it is not just in Britain where there is a call for it.

This popularity is reflected by the vast number of sites which sell Airsoft weapons, accessories and protective gear. More.

Why is it popular?

Airsoft gives people a chance to experience the physical and tactical side of a battle without being put in any real danger.

As long as you have correct eye protection, Airsoft is pain-free particularly in comparison to paintballing which often leaves people with bruises afterwards. More.

There are so many battle scenarios and various terrains to play on to provide a unique experience each time you try out a new skirmish site. 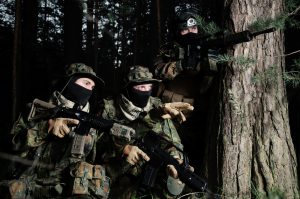 Battle scenarios can range from capturing the flag to modern military battle operations.

Any scenario or environment that can be imagined can be applied much like in a video game allowing for an immersive experience.

The rising popularity of video games, tactical warfare games, in particular, is a factor in making Airsoft popular- the fact that it is like a video game in real life.

You get the chance to try and try again in Airsoft after you are shot by returning to a respawn point for you to join the battle once more.

Players enjoy the challenge of developing battle strategies, keeping their minds stimulated while they play.

This goes even deeper with the range of weapons and equipment you can purchase beforehand to fight in the style that suits you and your game plan. 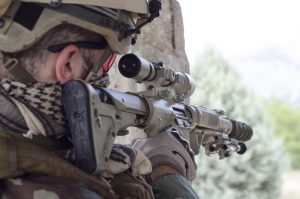 Many video games that simulate battle are often played with and against other people which is the same for Airsoft which can be a social bonding activity for you and your friends and even with strangers too.

Unlike a video game, you are actually living in a constructed battle.

If you like video games, you might have been told to go out and enjoy the outside every now and again.

With Airsoft taking place outdoors, you can fulfil that requirement and keep yourself active at the same time with plenty of running require to avoid fire.