Once you have your Airsoft weapon, you will probably be looking to join a skirmish site as soon as possible to start playing.

However, before you can go ahead with Airsoft games, there are several things you have to consider to ensure you are fully prepared when you arrive at a skirmish site ready to undertake Airsoft activities.

Body shots are generally harmless although close-range shots could make your body jump a little bit or leave small welts.

While chest protectors can be bought to give you added protection against the plastic pellets fired from Airsoft guns, they are not a necessity. However, face protection is.

Masks and helmets are also available to cover your eyes and give your entire face and head protection.

While pellets won’t cause major damage to the face, any small welts that appear on your face will be much more visible than on your arms and legs which should be considered when you return to the real world following Airsoft. 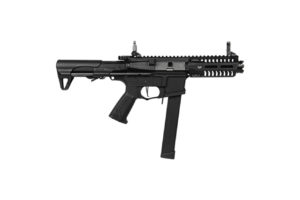 If you are carrying your gun on public transport or in your car en route to a skirmish site, the gun will need to be concealed in a bag or any other object which keeps it out of public sight.

Having the gun out in the open, even in a car, could cause unnecessary worry for members of the public and the police may be needlessly called out.

When you’re in the heat of battle, the last thing you want is for your gun to run out of power.

That is why it is important to charge your battery beforehand and it is also helpful if you bring spare batteries along so that these can be switched in and out throughout the day.

We have a number of batteries and chargers to choose from so you can gain a sense of the limits of each battery to know how many shots you can fire before the battery runs out.

You’ll need ammo for your gun. BB pellets are small metallic balls which are fired from your gun which acts as your bullets during the game.

BB pellets can be fit into any Airsoft gun although pellets of a certain weight are usually more suitable for one type of gun over another.

We have a number of BB pellet options for you to discover, allowing you to work out the most suitable pellets you need to fit into your gaming strategy.

Register as a player

You can register with the United Kingdom Airsoft Retailers Association (UKARA) for free to allow you to join in Airsoft games at skirmish sites.

You will be required to play three games on a UKARA registered game site over a two month period.

Any object flying into your eye will hurt and cause damage to your eye but with the speed at which pellets are fired, there is an added danger to your eyes.

Goggles, helmets and masks all offer protection for your eyes which are at risk of damage if they are hit by a pellet.

In a skirmish site where everybody is wearing the correct protection, there is little danger caused by the firing of pellets itself.

Many sites will enforce the rule for all participants to wear suitable eye protection which eliminates the only danger which comes from the firing of bullets towards another person.

The main danger of Airsoft is the terrain.

Although sites will be cleaned up regularly and debris will be removed, the terrain itself might be difficult to navigate.

Hilly areas may be harder to traverse safely while muddy areas can lead to falls and slips.

The franticness of battles means a lot of the time, you may be on the run which also creates the potential for people to fall over so any injuries associated with falling can be applied to Airsoft.

Airsoft guns should not be used against any person in any other circumstance than as part of an Airsoft game.

Members of the public won’t be wearing anything to protect their eyes so shooting at them puts them at serious risks.

Guns must be concealed in a bag and unloaded so that the gun isn’t seen as a danger by any member of the public who spots it.

Carrying an Airsoft gun in public is a danger to yourself as police may become involved or you could even be tackled by someone who suspects you are carrying a real gun.

The speed of firing pellets is dangerous to small animals which can be killed by them. Animals should not be shot at with pellet guns under any circumstances as we know you know.

With the rate of speed at which pellets are fired from guns, you may be forgiven for thinking that the impact of it against your body would hurt.

Any pain you may feel when you are hit by a bullet is an instant sensation, like having a rubber band snapped back against your skin but the pain won’t linger.

Body shots are generally harmless although close-range shots could make your body jump a little bit or leave small welts.

Chest protectors can be bought and thick clothing can be worn to give you added protection against the plastic pellets fired from Airsoft guns.

Unlike paintball, you won’t leave the Airsoft game with bruises from the pellets. Close range shots onto unprotected skin can draw blood but won’t pierce the skin.

Running, climbing and jumping may play a huge part in your game so you may have some sore limbs afterwards and if any of these activities leads to you falling over, that may cause you a bit of pain too.

Check Out These New Products