Airsoft grenade launchers are a type of airsoft weapon that is designed to launch airsoft grenades. They are typically gas-operated weapons that use compressed gas, such as green gas, to launch the grenade.

Some airsoft grenade launchers can also use CO2 cartridges in order to propel the grenade.

When it comes to airsoft though, grenade launchers are usually at the forefront of it all!

Need to clear a room? Bumped into 4 enemies by accident? Enjoy launching 200 BBs at someone with effortless ease?

What Are Airsoft Grenade Launchers?

These devices are mostly used in close quarters combat (CQB) due to their ability to clear rooms quickly and efficiently.

How Do Airsoft Grenade Launchers Work?

These devices are mostly used in close quarters combat (CQB) due to their ability to clear rooms quickly and efficiently.

There are two main types of airsoft grenade launchers: under barrel and stand-alone.

Underbarrel airsoft grenade launchers are designed to be mounted on an airsoft rifle, usually underneath the barrel. This allows for a more compact design and keeps the weight of the weapon down.

Designed to be attached to a rifle barrel, the M203 provided a versatile ordinance option to a standard U.S M16 and M4 Carbine. Traditionally a situational weapon, a grenade isn’t effective in every scenario, but where it is, it shines.

The M203 launcher solved this problem by offering a portable, easily to manage option to a rifle, which worked in many more situations.

We ’ve put together a list of our top 5 favorite grenade launchers currently on the market. This list was compiled based on a variety of factors such as price, performance, and durability.

The unique M320A1 grenade launcher is a standalone system designed to fire airsoft 40mm moscarts and looks the part with modern police or military loadouts.

Swapping between the two configurations takes mere seconds, so if you are the indecisive type of grenade launcher user this will suit you well! The M320 is a reliable and accurate weapon that can be effective in a variety of situations.

If you are looking for a standalone grenade launcher that looks and feels like the real thing, then the S&T M320A1 is the perfect choice for you.

Next up is the S&T G36 Grenade Launcher, which is designed to be mounted on an airsoft G36 rifle.

This grenade launcher is made to a realistic standard, with an alloy launcher tube and polymer pistol grip and handguard assembly. Although a fair amount of polymer has been used for construction, it still clocks in at 1.6kg, so you will definitely know that it is attached to your replica.

The G316 also features a metal trigger and cocking handle, as well as an adjustable Hop-Up unit. The grenade launcher is compatible with most 40mm gas grenades on the market, making it a versatile option for your airsoft arsenal.

Whether you are looking for a realistic accessory for your replica or a practical way to take out multiple targets, the S&T G316 Grenade Launcher is sure to meet your needs. 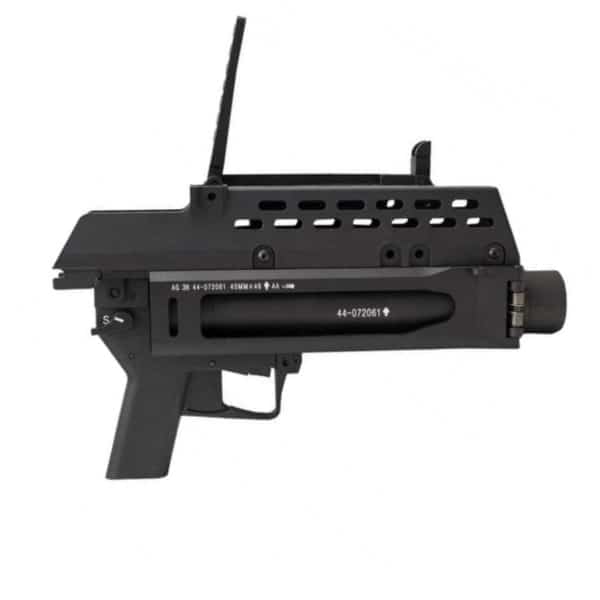 A metal and polymer constructed G36 grenade launcher by S&T. The G316 is a great addition to any airsoft G36

With the 40mm Moscart Launcher, you can now fire 40mm airsoft shells at your opponents. This hand-held pistol-style grenade launcher is perfect for those who want to take their airsoft game to the next level.

The weapon features rails top and bottom so that it can be attached to other RIS rails with a RIS to RIS adapter (sold separately). So, if you’re looking for a new way to dominate the airsoft battlefield, pick up a 40mm Moscart Launcher today.

The 3 mounts in the box are designed to make the launcher fit on different platforms. The first mount, which is already preinstalled, is the barrel mounted version for the M4 series. It clips into the outer barrel at the rear and then hooks over the outer barrel on the front.

The second mount is a 20mm RIS mount which will make the launcher fit onto any 20mm Picatinny rail and the third mount is is like the rear barrel mount, but is able to fit onto SRC and Tokyo Marui standard M4’s where the delta ring is a different design.

With this replica, you will be able to have hours of fun! 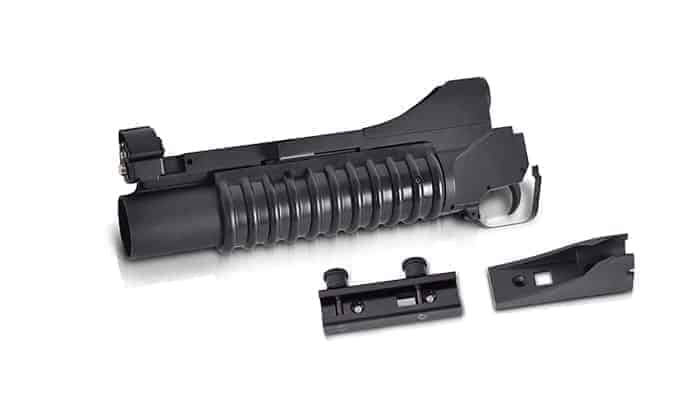 Nothing quite beats a 40mm grenade shell for wiping out groups of enemies and clearing rooms and corridors. This launcher is great because it can be mounted to multiple types of airsoft gun and operates easily and quickly.

What is the best grenade launcher for airsoft?

The S&T M320A1 Standalone Grenade Launcher is our top pick. It is a standalone system designed to fire airsoft 40mm moscarts and looks the part with modern police or military loadouts.

What is the difference between a gas and co2 powered grenade launcher?

How do I attach a grenade launcher to my airsoft gun?

Most grenade launchers will come with mounts that allow them to be attached to different types of airsoft guns. Consult your user manual for specific instructions on how to attach the launcher to your particular gun.

I’m looking for a more compact and lightweight airsoft grenade launcher. What should I choose?

If you are looking for a more compact option, we recommend the Battleaxe 40mm Grenade Launcher Pistol. This hand-held pistol-style replica is perfect for those who want a smaller size without sacrificing performance.